With a deeper and more curious connection to its underground, Paris has another world that lies beneath its surface. Paris has unknown spaces of all kinds: canals, reservoirs, crypts, bank vaults, carrières as well as wine cellars that have been transformed into nightclubs and galleries. The surface world could barely notice and most Parisians may only be indistinctly aware of the extent to which their cities’ underground is occupied. 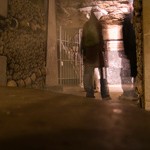 The underworld of Paris

Over time the use of these tunnels and caverns has changed hands: In the 19th century they were mined for building stone, then farmers used them for production of mushrooms. During World War II, French Resistance fighters used some of the quarries to hide, while the Germans built bunkers in others. Today brings a different group to the underground; an illicit group of leaderless individuals who spend days or weeks without coming above the surface. Also known as cataphiles, these people love the Paris underground. Cataphiles of course make some of the best tour guides to the underworld of Paris, with their own intricate maps as well as secret rooms that can’t be found on any map. They are often young people fleeing the surface world and all of its rules. The scene grew in the 70’s and 80’s when it was easier to enter through forgotten doorways and open entrances. They would crawl through the tunnels filled with bones aka the catacombs. Cataphiles really became known to us as what they are due to the freedom they were given underground. Many of them say ‘To be happy, stay hidden.’ In secret places, they partied, staged performances, created art and took drugs. And since the end of the 80’s it has become increasingly difficult to enter the underground. Private property owners began closing off entrances and police now patrol the tunnels.

And while the cataphiles roam the underground, archeologists and forensic pathologists are investigating the catacombs, where some six million Parisians reside. And each skeleton has a story. Meanwhile, inspectors from the Inspection Générale des Carrières, the IGC investigate the quarries. It is their job to ensure that Paris doesn’t collapse into the quarries that damage its infrastructure. Today Paris sits atop formations of gypsum and limestone. While the Romans were first to produce the stone, their sculptures, bathhouses and arena can still be found on the Île de la Cité as well as the Latin Quarter.

For those that have experienced Paris’ underworld, they can’t help but look at the numerous manholes and envision what lies beneath, their paths and many branches. Cataphiles will tell you this is perfectly normal after returning to the surface world. One can’t help but imagine the freedom and many possibilities that lie beneath.

Buckingham Palace Summer Opening July 23 to Oct 3 Visiting Paris in August: Not Such a Bad Idea After All
Scroll to top