For many tourists, a trip to Prague wouldn’t be complete without sampling some of the city’s famous beer. The Czech Republic is the home of beer, and beer has been brewed here since at least the 12th century. The country has the highest per-capita rate of beer consumption in the world, and you’ll see beer sold at every bar, restaurant and cafe you pass. Among the many things you should know about Prague before you set off on your trip, how (and what) to drink should be at the top of the list. Here’s what you need to know to make the most of your beer drinking experience in Prague. 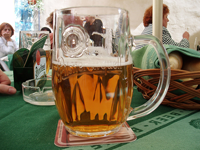 Most of the beer in Prague is lager. Most often, you’ll see Pilsner Urquell, Budweiser (no relation in taste or business to the American Budweiser), Budvar, Gambrinus, Kozel and Staropramen, most of which come in both light and dark varieties. Most pubs only serve one brand (just look for the sign), making your choice a little easier. For the freshest beer, look for tankovna (a tank pub), where the beer is unpasteurized and has a richer flavor.

In recent years, a few more options have been creeping up. Microbreweries like Pivovarksy Dum serve unusual varieties like banana beer and coffee beer, a nice change if you get tired of lager. In summer, there’s no better place to drink some Czech beer than in a beer garden, like Riegrovy Sady, located in a sprawling park near the Vinohrady district.

For the most authentic beer-drinking experiences, avoid any place that lists the price in euros. In general, a .5l beer should cost about 30-40 kc, less than $2. In a traditional pub, just set your coaster in front of you and then beer will start coming until you stay stop. If it gets to be too much, soak up some of the alcohol with some hearty Czech food like a pork knuckle, goulash and dumplings, or some beer cheese served with fried bread. 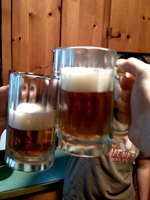 When it comes time to toast, raise your glass, make eye contact with person you are toasting and say “Na zdravi.” Set your glass down for a second and then drink. Cheers!

By Katie Hammel of BootsnAll

Five Ways to Save Money on Travel to Vienna Transat Vacationer, Kate McKenna of Transat Holidays: the trip of a lifetime...
Scroll to top